My 3 Favorite festivals are coming up! Hard to decide which one to go to since 2 of them fall on the same weekend and the next one falls the week after.

Here is the rest of Festivals all over the  Philippines for January.

ATI-ATIHAN FESTIVAL 2007  January 1- January 15 | Kalibo, Aklan Scene of a yearly celebration in honor of Sto. Nino held every third week of January, popularly known worldwide as Ati-Atihan. So called because Aklanons, domestic and foreign tourists, wipe soot on their faces and done ethnic paraphernalia and masquerade around town as Negritos and make merry and dance in the streets to the beat of ambulant ethnic troubadours.

AGUMAN SANDUK  January 1 | Minalin, Pampanga Description The Aguman Sanduk of Minalin is celebrated in the afternoon of January 1, while the rest of the country takes a break from the previous night’’s New Year revelry, and there’’s no one to catch the boys and men of this sleepy fishing town wear their mother’’s lipstick and put on their wive’’s dresses

FEAST OF THE THREE KINGS  January 2 | Gasan, Marinduque A feast honoring the three kings who are visiting houses around the Poblacion of Gasan

BAILES DE LUCES  January 5 | La Castellana, Negros Occicental The town’s celebration of Charter Day and a befitting culmination of the Christmas season, the festival is conceptualized as a festival of hope and thanksgiving. Thanksgiving for all the blessings received in the year that was and hope for a prosperous new year. Its unique feature is the use of lights or “luces” as props and adornment and its nocturnal festivities and streetdancing

KURALDAL  January 6 | Sasmoan, Pampanga The Kuraldal of Sasmuan occurs during the week of the town fiesta on January 6, when Kapampangans from neighboring towns gather in front of the chapel of St. Lucy and dance for favors all night

BINANOG FESTIVAL  January 8 | Lambunao, Iloilo Binanog is a yearly festivities celebrated by the Lambunaonos every January in honor of infant Jesus. Binanog means a pool of dance by the people in hinterland of Lambunao. The following are the Binanugan, the dance depicting the movement of the birds, the Inagong sayaw-sayaw, a celebration dances and the Dinagmay, the courtship dance. The dance movement is accompanied by lively drum beatings.

FEAST OF THE BLACK NAZARENE  January 9 | Quiapo, Manila An intense, day-long festival highlighted by a mammoth procession through the streets.

ARAW NG KORONADAL “HINUGYAW FESTIVAL”  January 10 | Koronadal Translated literally, it means “Day of Koronadal” and indeed it is. Hinugyaw Festival, dubbed as the “Festival of Festivals”, is a celebration of the different cultures that has dwelled on the fertile valley of Koronadal for many years now.

SINULOG FESTIVAL 2007  January 12 22 | Cebu Cebu’s biggest and most popular festival in honor of the Holy Image of Senyor Sto. Niño

MAKATO STO. NIÑO FESTIVAL  January 15 | Poblacion Makato, Aklan The ati-atihan festival of Makato dates back before the Spaniards came to sow the seeds of Christianity into this land. During the celebration, thousands of Catholic devotees from all over the country and those from abroad felt the urge to come and join in the wholesome, frolic and religious fervor of thanksgiving to the Holy Child, Sto. Niño.

PASUNGAY FESTIVAL  January 15 | San Joaquin, Iloilo Celebrated every 3rd Saturday of January. This spectacular & exciting event find its origin on a hillside in one of the inland barangays of the municipality when resting farmers witness for the first time the fight between the two raging bulls, set loose by their herdsmen. It caught the fancy of the barangay folks and soon it became a popular entertainment in most barangay fiestas. During the municipal fiesta, the best bulls from different barangays are pitted against each other by weight category in a “Bull Derby”.

KINARADTO FESTIVAL  January 15 | Buenavista, Guimaras This cultural festival makes maximum use of the rich cultural tradition of the oldest municipality of the province. The presentation of songs, dances and musical tableau depicts the various influences Buenavista has been subjected to. Celebrated in honor of the town’s patron saint, Sr. Sto. Niño, Kinaradto promises the participant loads of unforgettable positive experiences.

BATAN ATI-ATI MALAKARA FESTIVAL  January 15 | Poblacion Batan, Aklan The participants celebrating this festival wear masks made up of paper mache and prepared costumes. The festival is celebrated in honor of the Sto. Niño with merry making for a bountiful harvest, peace and prosperity, street dancing along the streets and plaza of the poblacion. A holy mass is celebrated before the start of the contest on Sunday morning proceeded with a parade of participating tribes.

IBAJAY ATI-ATI MUNICIPAL AND DEVOTIONAL FIESTA  January 16- January 22 | Ibajay, Aklan A religious feast in honor of its patron saint Sto. Niño, held by transferring the holy image of the patron from Ibajay Cathedral Rectory and enthronement at St. Peter Parish Church, by way of amusing the image from where it was originally discovered and brought to the church.

KAHIMUNAN FESTIVAL  January 16 | Libertad, Butuan City Butuan’’s version of the Sinulog of Cebu which has an equally lively and spectacular street dancing.

PANGISDAAN FESTIVAL  January 16 | Brgy. Tangos, Navotas One of the highlights of the Navotas Day celebration featuring a street dancing and float competition focusing on the fishing industry.

CARACOL FESTIVAL  January  | Glorietta 4 Park Makati City, Metro Manila Official Festival of the City of Makati by virtue of resolution No. 251 of Jan. 21, 1991 displaying the call of the local Government for the protection and conservation of our ecology.  BANSUDANI FESTIVAL/FEAST OF THE DEVINE SAVIOR  January 17 | Bansud, Mindoro Oriental A thanksgiving for a bountiful harvest which coincides with town fiesta. It features dances and cultural presentations by schools and barangay communities.

SADSAD SA KALYE  January 19 | Janiuay, Iloilo “Sadsad Sa Kalye” is a dynamic mass presentation expressing the beliefs, views, visions and aspirations of the Janiuaynons based upon tradition, historical experiences, and culture of the people of Janiuay. It is a street-dancing affair buoyed by the kaleidoscopic prism of cultured grace and fineness that reflects the embodiment of all that are beautiful in man’s body and soul. “Sadsad” is a native word meaning dance.

PANDOT SA BACOLOD  January 20 | Bacolod City, Negros Occidental A true to life dramatization depicting the life of Bacoleños during the Spanish times and the life of being a Catholic

ALTAVAS STO. NIÑO FESTIVAL  January 21- January 22 | Poblacion Altavas, Aklan This day marked the end of the Fil-American war in Altavas. Since then, January 22 is being celebrated as an Annual Thanksgiving and Armistice Day in Altavas. Later, the date was adopted as its municipal town fiesta. This is the continuation of the joyous celebration of peace when Fil-American war ended in this municipality.

PANUBASON FESTIVAL  January 22- January 25 | Valderrama, Antique An annual festival of young Valderramanian talents. A festival created to discover and develop special talents from aspirants in the field of music, dances and sports. The festival is also a thanksgiving festival for the good and abundant crops during their respective harvest season. And such are displayed and shared during the event. A Mardigra Competition participated by the LGU elementary and secondary level highlights the festive mood.

LONGANIZA FESTIVAL  January 22 | Vigan City, It features the “Longest Longaniza” with the hope of entering to the Guinness Book of Records as the longest longaniza of the world.

DINAGSA ATI-ATIHAN FESTIVAL  January 24- January 30 | Cadiz City, Negros Occidental A weeklong celebration every 3rd week of January in honor of our Patron Saint, the Señor Sto. Niño. Various programs are lined up such as motocross, drum and bugle corps competition, Ginoong Cadiz and Search for Mutya ng Cadiz. These are a few of the many programs during the celebration. This spectacular revelry features “Ati” tribes garbed in their colorful costumes dancing to the fast and deafening beat of drums while carrying the image of the Holy Child Jesus. This year, activities will start on January 22-29.

SAUG FESTIVAL  January 25 | Lemery, Iloilo A festival which features eight (8) districts portraying different situations or scenes on the real purpose of Saug. Saug is a local term/dialect which means to transfer wood/other farm products from one place to another by means of karosa (sled).

LUBAY-LUBAY FESTIVAL  January 25 | Cauayan, Negros Occidental Lubay-Lubay Festival portrays and preserve the early culture of Cauayanons in facing adversities, hardships and difficulties as well as abundance, plenty, prosperity and sufficiency, and to foster the spirit of unity, cooperation, camaraderie and thanksgiving especially for the blessings endowed by the Almighty.

DINAGYANG FESTIVAL 2007  January 26 28 | Iloilo City Street dancing characterized by frenetic stomping of feet and hypnotic drumbeating. It is a colorful whirl of thousands of people dressed in unique costumes dancing & chanting all day and night.

PANAGBENGA – BAGUIO FLOWER FESTIVAL 2007  January 27- March 12 | Baguio City Also known as the Baguio Flower Festival, it will be the 10th holding of this annual event which will showcase the City of Baguio as a City of Flowers. The Floral Street Parade will be held on February 25 and the Floral Float Parade on February 26.

SANA-AW FESTIVAL  January 27 | Jordan, Guimaras Primarily a celebration of the economic endeavor that made Jordan what it is today. Sana-aw also pays tribute to the skillful artisans and the enduring workers in an endearing characterization through dance drama.

HINIRUGYAW FESTIVAL  January 29 | Calinog, Iloilo The festivity and fun of the people of Calinog reach a peak during the feast day of the Child Jesus or Sto. Niño. The poblacion is festooned with multi-colored traditional decorations inviting everyone to glorify the Lord. Hirinugyaw, a visayan term for jubilation and rejoicing, traces its roots with the enthronement of the replica of Sto. Niño de Cebu in 1970.

FEAST OF ST. BLAISE (MUNICIPAL AND RELIGIOUS FIESTA)  January 31- February 3 | Sebaste, Antique An annual pilgrimage festival both celebrated by the religious community and the municipal, local gov’t unit in honor of St. Blaise. Every year, thousands of pilgrims provincewide and even from other regions travel to Sebaste to seek homage and intercession to the Patron Saint of Sebaste. 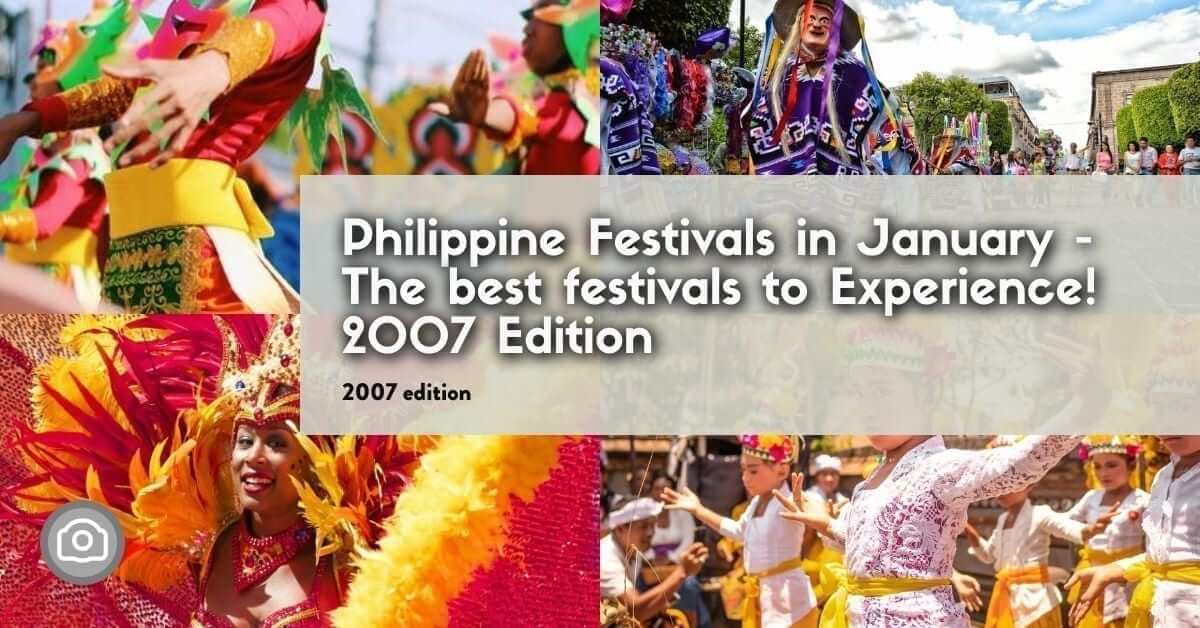